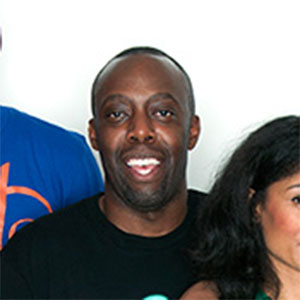 Random Objects is one of my favorite independent small businesses. Over the years, I’ve bought products from there, turned other people on to them…I’m even drinking from their Midnight Oil mug right now while I put this interview together. So imagine my surprise when I find out Random Objects is a one-man show, ran by design dynamo Anthony Simpson. I had to talk to him!

We talked about how he started Random Objects and where his inspiration comes from for new products and designs. This is a shorter interview than usual, but Anthony threw in a little surprise. Read on through to the end to find out what.

Who are you and what do you do?

My name is Anthony Simpson and I am the founder and creative director of Random Objects. I basically run every aspect of the business, from design, customer service, order fulfillment, inventory, to shipping. Simply put, I wear many hats here at R.O.

Tell us about Random Objects and how you got started.

Random Objects was officially launched in 2008. The concept for R.O. was based around my love and appreciation for quotes. I grew up hearing them and they became ingrained into me. My thinking was that if I like quotes, someone else might like them too! I launched five designs initially and they were well received. So as the tees started to sell, I would introduce a new design, and here we are today with 40+ designs and products (with more on the way).

How do you get inspiration for your designs?

Inspiration can strike anywhere! I have gotten ideas from the most unlikely things and places. Being that I live just outside of NYC, there is a vast amount of places in the city that I can go to for inspiration like museums and galleries. Just walking on the streets and seeing the street art has also given me new thoughts and ideas on design execution. All those places are great for inspiration, but my primary source that I draw inspiration from are the quotes themselves. When I read a quote I often get an idea of how I am going to interpret it visually and how I am going to lay it out. I always have to make sure that I have a notebook and pencil handy!

My typical day starts after I have returned home from my day job as an educator. This is when I officially “punch-in” at Random Objects.

I start with exchanging emails with customers and business contacts, then it is time to start processing orders that have come in. This is the most tedious part of the day, but also the most gratifying. Once the orders are processed, it’s time to start designing. Sometimes I am adding the finishing touches to a design or starting to research and layout a totally new concept. This process starts all over again the next day.

Let’s talk a little bit about your background. How did you get started in design? Did you have any mentors that helped you along the way?

I have a God-given talent and have always been into creating art ever since I was a child. Pencil, marker, and paint were my media of choice all the way through college. It wasn’t until the early 2000s that I became interested in airbrushing. I wanted to create tees to sell in local stores in my area. I made one tee for a friend for an upcoming ethnic parade that they were going to attend. After people saw that tee, the orders started coming in for more. Recreating the same design over and over was challenging. The demand for these airbrushed tees became far too time-consuming for me, and I began to research how to reproduce tees easier.

That is when I discovered silk-screening and the various programs needed to create printable artwork (Illustrator & Photoshop). The vast amount of capabilities that these programs offer really helped to launch me into the world of graphic design. I began to follow tutorials on YouTube and other sites to learn the techniques needed to create my designs digitally. I still utilize these sites today if I need to learn how to do something. I wish I had someone to mentor me in the past! It would have saved me A LOT of time…and frustration.

You also teamed up with Highsnobiety for your first online lookbook! How was that process?

I had an amazing time creating the look-book! Jeff [Carvalho] at Highsnobiety, and all the various people involved with this project, gave me full creative control over the art direction of the project. It really gave me a behind-the-scenes look at all the components that go into a professional photoshoot and ad campaign. Traveling to locations, camera crews, choosing models, setting up shots, and selecting photos are only a few of the many things that I experienced. I would not have been able do this without all their help. It truly was a blessing and an honor to be a part of it.

What are the three most important lessons you’ve learned since starting Random Objects?

Who are some other designers that you admire?

Good question…there are so many! Marc Ecko, Shepard Fairey, and KAWS are a few of the artists I admire because they took their love of art and turned it into a lucrative business. These guys are giants in the art world, but I admire good art period! Seeing how various graphic designers and street artists use color and particular styles inspire my artwork greatly.

I also admire brands like Johnny Cupcakes and The Hundreds too because they started out similar to how I have and now have thriving businesses and a huge fan base. Their example helped to inspire me to try and follow in their footsteps.

About Anthony: Anthony Simpson is the founder and creative director of Random Objects. Check out his business at randomobjects.net. Use discount code REVISION to get 10% off your entire purchase!