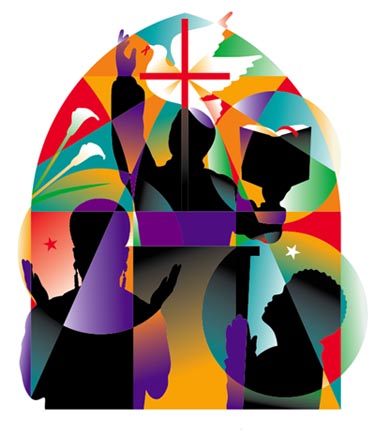 Over the past decade, a large number of churches have started using websites, social media, and graphic design to spread the word of God, increase their membership, raise funds, and help keep their members and the community informed on the latest events and happenings. Churches still serve as the cornerstone for most African-Americans to keep them informed not only on spiritual matters, but matters in the community and the world. Before developing or rebuilding a website, ministries must consider the size, socioeconomic status, age, gender, and race of their communities and  target audiences to have a better understanding of their members needs and how a church website should be utilized to reach their target audiences.

How should web designers collaborate with Black churches to get their messages across to people in the community? Are there certain messages and media that need to be emphasized in web design that churches in other cultures don’t necessarily address? Here are three factors to consider when creating websites for Black churches.

In general, having a design that is accessible, inviting, and modern are important factors to consider when designing websites for churches. When designing a website for a black church, are there certain factors designers must consider? For example, whether or not pictures should include only blacks or a multicultural congregation could become controversial if not addressed during consultations and meetings. If a church is more traditional in culture and practices, should web and graphic designs be more basic and simple to keep from alienating their audience? Should the website only show what the church has to offer, or should it include a number of advanced features? Would a link for online donations and tithes scare members away? Would a livestream sermon cause controversy with members who think that people won’t physically attend church service?

On the other hand, if the church is more contemporary in its approach, does that blur the line between secular and sacred? Do members want livestreams, podcasts, links to social media platforms, or requests to receive messages and inspirational texts from the pastor on their mobile devices?

This sounds like a lot, but when you’re designing websites for black churches, you have to be mindful of generational and cultural differences and find out what members of the church want and need from their church website. A more strategic approach in the beginning will save a lot of headaches in the future.

When designing websites for black churches, it is very important to include mobile device support in order to increase access. These mobile sites can be stripped-down versions of the main church website with a simple interface — responsive design makes this easy to accomplish without designing a completely separate website. Include basic information such as the church’s location, contact information and a message from the pastor.

Historically, the Black church has been central to every major political and social movement in the African-American community. Social media has gained a foothold in the Black community and black churches can use this platform to bring attention to community issues and bring more people into their ministries.

According to the Pew Research Center, 26 percent of African-Americans who use the Internet use Twitter, compared to 14 percent of online white, non-Hispanic Americans. Additionally, 11 percent of African-American Twitter users say they use Twitter at least once a day, in comparison with the 3 percent of white users. Recent numbers indicate that as many as 40 percent of Twitter users are African-American. “Black Twitter” has been used to describe these users who focus on issues that directly affect the Black community. According to sources, Black Twitter has been instrumental in bringing massive attention to issues that would have otherwise gone ignored in the media.

Many black churches are savvy enough to use social media platforms to bring attention to their ministries and their work in the community. By using social media such as Twitter or Facebook in conjunction with their website, Black churches can spearhead activism with members of their congregation — this is something web designers should consider from the initial consultation.

The Black church has greatly evolved and some communities are quickly adopting the latest digital tools in order to reach out to their congregation and others in the community. When designing websites for black churches, a number of factors must be considered in order to design an effective website for the church, its members, and the community at large. Black web and graphic designers who may have active roles in their churches could certainly bring these ideas to the forefront when designing these websites.

What are some additional ideas and factors should a web designer consider when designing sites for black churches? Feel free to leave a comment.