SXSW is an annual music, film, and interactive conference and festival held in Austin, TX.

SXSW allows anyone to submit proposals for panels and presentations for the conference, and these panels are put to a public vote using the PanelPicker.

There are thousands of panels available to vote for to be included in SXSW’s 2015 slate of programming (including two that we have!) But with so many panels to sift through, which ones are worth your vote?

Here are 10 panels we think would be awesome to see. Vote using the buttons below — voting ends on Friday, September 5, 2014 at 11:59pm Central Time!

Which panels do you want to see included at SXSW 2015? Let us know in the comments! 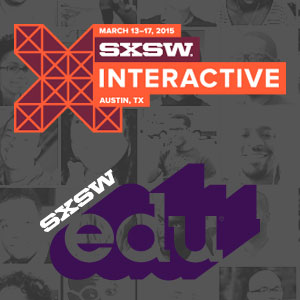 Big news! We have submitted two proposals for presentations for SXSW 2015 (Interactive and SXSWedu) and they are included in the SXSW PanelPicker!

We need your help to make sure these presentations included in SXSW’s programming for next year. Public voting accounts for 30% of the decision-making process for inclusion, and it’s an extremely competitive process.

So how can you help? By voting for our panels on the SXSW PanelPicker and leaving a comment! Here’s how to do it.

Voting ends on September 5, 2014 at 11:59pm CDT. Check after the jump for our presentation descriptions and links directly to the voting pages. What panels are you voting for to be included at SXSW 2015? Let us know in the comments!