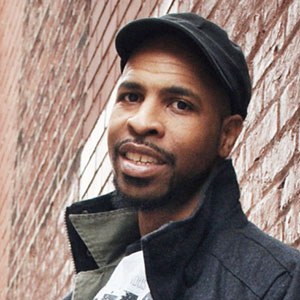 It’s that time again, time to highlight another designer. Let me introduce you to Donald Wooten II, an impressive illustrator and designer worth keeping your eye on. Donald is the owner is the owner of Stolen Outfitters and Holla Graphics.

Why and how did you become a designer?

I grew up as a creative. I have never been anything but a creative. I drew more than I spoke to the other kids in school or the teachers. I wrote more than I spoke to my family when at home. When I did start socializing, I was already designing my own comic books cover to cover. I knew the roles of penciler, inker, letterer, writer and editor. I wore each hat with a tilt and built my comics out of folded loose leaf and my version of saddle stitching.

By the time I got to high school things started going sideways. I changed schools three times, was forced into a “long distance” relationship that failed and ultimately graduated with a senior class that I loved but didn’t grow up with.

My love for comic books died between episodes but my voice got stronger. My point of reasoning became what was worth mentioning. My rebellious perspective had now made a pact with my spirit which was already rooted in Hip Hop. (This is when it was openly practiced as a culture instead just functioning as a genre of music in regards to the music industry.) Whereas breakdancing had dimmed in appeal and I was too heavy handed to DJ, graffiti and MCing put my on a path that I haven’t left.

The graffiti taught me appreciation for letterforms, color concepts and how to approach layered art in real time. You can’t erase on a wall. The MCing taught me how to speak effectively in fewer words and also how to create slang or use obscure terms and make them memorable. (Think Rakim: I can take a phrase that’s rarely heard / flip it / now it’s a daily word) These two addictions shaped my being into a graphic designer.

Yes, I went to what presented itself as a school. I learned how to turn on a computer and wasted $20k there. I graduated post 9/11 into and the industry that didn’t have a place for me. I started a company and attempted to make a  place for myself. As my skill sets increased, so did my offerings and I evolved from a designer to a design service also offering print and marketing. Continuing that evolution and feeding the need to expose what it is that I do has led to the development of Stolen Outfitters, an apparel company that binds my abilities and outlook together in a retail package. So yeah, I was born a designer. It just took me a while to accept it.