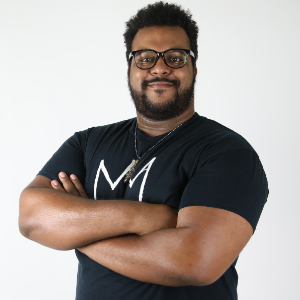 Britt Lyle II is more than just a designer — he contains multitudes. Currently, he works as a graphics assistant at AMB Sports + Entertainment, where he helps out on visuals used by the Atlanta Falcons and Atlanta United. But outside of work? That’s when you see the different facets of what makes Britt unique.

We started our conversation discussing Britt’s work, which led to him talking about growing up in Orlando and attending Florida A&M University and studying through their esteemed design program. He also shared his story about moving to Atlanta and attending SCAD for graduate school, falling in love with motion graphics, and shared some of his other talents, including glitch art and cosplay!

Being a designer doesn’t mean having just one skill, and Britt is living proof of that!